What follows is a copy/paste from some threads I started, recently, a comment from Dwayne McDuffie (of Milestone Comics fame, among other things), and scans of the comics material in-question.

Previously, Iron Man had objected to Triathlon being nominated for Avengers membership because 1) he didn't trust the organization to which Triathlon belonged and 2) he didn't like the idea of making someone an Avenger because his/her skin-color would take some of the heat off of the team. Triathlon ended up joining, anyway, knowing that Iron Man didn't want him there, but misconstruing Iron Man's objection.

Later, during a mission, Iron Man approached Triathlon to bury the hatchet, so to speak. I think he followed-up by saying something like, "What do you say?"

"What do I say," replied Triathlon as he slapped Iron Man's hand away, "I say that's mighty white of you..."

For five to ten minutes, I couldn't get past that part without cracking up. I thought it was SO damned funny (and if history is any indication, I'll be the only one who does).

This site summarizes the issue. [ http://www.uncannyxmen.net/db/issues/showquestion.asp?fldAuto=1447 ]

'Triathlon slaps the hand away and tells Iron Man that it is “mighty white” of him to ignore the way he treated the idea of black Avengers. Triathlon turns and leaves and explains that he needs to deliver water for the rich lady.'

I *think* the gap in my collection is why this exchange was foreign to me and caught me so off-guard. I bought the tpb recently and thought it was so damned funny that I laughed at it, on and off, for the half hour or so. In fact, whenever I heard the words "might" or "mighty," I'd succumb to a giggle-fit.

I KNOW, I KNOW, Triathlon was being a bit of an arse, but it still cracked me the hell up. No doubt, part of my amusement springs from the fact that this wasn't written by a Black man (to my knowledge, anyway).

I just wondered if anyone around here remembered it and what your thoughts were.

Dwayne McDuffie: "When Hardware said the same thing in his first issue, I was pilloried as a racist on Usenet for month. 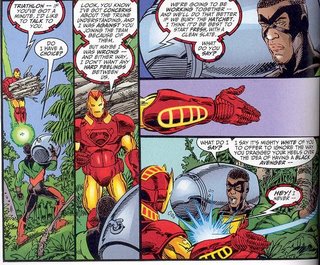 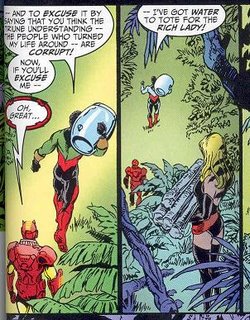 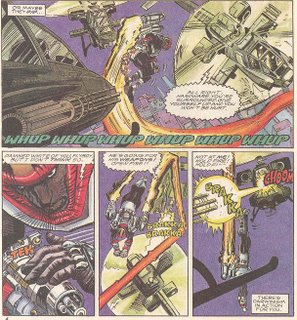 I keep thinking I should try to scan the original conversation - the one to which Iron Man and Triathlon are referring. Ultimately, I decided against it. Triathlon's take on where Iron Man was coming from was technically incorrect. Besides, Triathlon's "that's mighty WHITE of you..." line was more historically-focused than anything.

I just wish it were more clear, from the provided scans, that race WAS a part of the debate. People keep getting the impression that Triathlon's assholishness was pulled out of nowhere, which isn't exactly true.

I still say the shit was funny.

Too bad I didn't see Hardware's statement from the 90's. Then again, I didn't (and still don't) know squat about "Usenet" or whatever and couldn't have leapt to anyone's defense in any significant way.


EDIT:
I've gotten some more information/perspectives since I originally posted this...

Kurt Busiek: "In fact, "white of you" used to be a compliment -- both Tri and Hardware before him were using an outdated compliment from less-enlightened days in a backhanded manner.

So it doesn't really parallel to "mighty black of you," since that wouldn't be an ironic use of a pre-existing phrase with an underlying second meaning.

Y'know, I had no IDEA this was a known phrase. If Mr. Busiek hadn't shared that context I wouldn't have known it was an old-style compliment.

In fact, I just talked to an online buddy who says he's been hearing it for THE LAST TWELVE YEARS! I thought that was WILD, especially in this day and age! Here's the text of our convo.:

He said this was actually in the past couple of YEARS! Can you BELIEVE that mess?! I hope I can find something about this online.

Mr. Busiek also shared the following: "According to wordorigins.org, it's more recent than I thought:

Often phrases like call a spade a spade or words like niggard are mistakenly given racist etymologies. It is easy to understand why these mistakes are made in our race-conscious society, although it often seems as if I am battling the forces of ill-informed political correctness to preserve the right to use these words and phrases. Sometimes though, words and phrases do indeed have origins rooted in racism. And the phrase that's white of you is one of these.' "

The use of white man, meaning an honorable or square-dealing person dates to 1877 and is an Americanism. The implication is that non-Europeans are not honest or square. The phrase white of you is first recorded by Edith Wharton in 1913."

I've heard it since, but not too often. I thought Busiek's use of it in Avengers was pretty clever, personally.

It actually is much earlier than the Clint Eastwood movie (he actually says that to a black guy), but I think it was first used in an old western circa 1940, it might have been an early john wayne move (one of the musketeers movies)...but John Wayne didn't say it. It was said between these 2 "varmit looking white guys"

I love old movie lines, some are so racist you got to laugh. Like Edwin G. Robinson in the movie the barber where he tells the porter to come here so he can rub his head for luck. garland in austin

I heard it in a classic movie from 1938 "Bringing up Baby" with Cary Grant and Cathrine Hepburn. It was said by Grant's character.

I've heard it in a movie or two since this post was originally published. It still amazes me that I could live so long without having heard of this.

As usual, I'm the last to know. Thanks for your comments...reminding me of that fact. ;-)