I'm pleased to say that I voted in the Presidential election, yesterday. 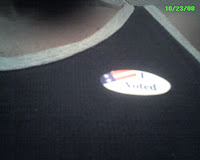 And I wasn't alone. 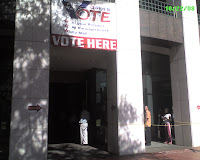 If it took about a half hour for me to vote, on a weekday afternoon, during the early voting period, I'd hate to imagine what the lines will be like in a couple of weeks.

At least they didn't (seem to) try any funny stuff. All I can do now is cross my fingers and hope that my vote counts, in the end.*

EDIT: Oh yeah. And I'm embarrassed to say that there was a marriage issue on the ballot. Florida doesn't give a damn about gays, unfortunately. "We" would rather see an orphaned child raised by the system than by one or two loving parents who happen to be gay. But that wasn't enough, I guess. Now they want to make sure those two parents can't marry each other, either.

Well, the homophobes may win this one, but not with my help.