This Labor Day, I was flying solo. After taking care of some stuff at home, I hopped on my bike (bicycle, not motorcycle) and biked to Sonic for a "Happy Hour" special discounted price on a (non-alcoholic, of course) cherry lime-aid beverage.

From there, I biked to the grocery store to buy some cheap bread to feed to ducks at a local lake. I put the bread in the sack I carry on my back while biking, then headed to and biked around the lake.

Because of the recent, semi-nearby hurricane(s), those of us in Tallahassee and surrounding areas have received a ton of rain. I read that local sewage systems were compromised due to the increased water flow. My nose can confirm this as I bike through certain areas. I believe the water treatment representative said that they usually deal with 17 million gallons per unit time, but recently it's been more like 41 millions gallons.

Even a week after the worst of the downpours stopped, about a week, ago, the lake area had overflows like the following: 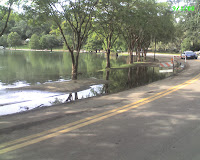 (click picture to enlarge)
Below is a picture of what appears to be a street cave-in or sink hole or something (feel free to correct my terminology) - probably due to the flooding from last week. 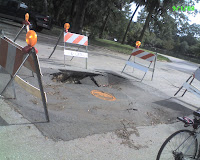 (click to enlarge)
After biking around the lake, I chose a spot and took my back sack off. Immediately, before I could even open the sack, a group of ducks headed toward me. The more I handled the bread bag, the closer the ducks got. Around the time I got the bread out, the crowd of ducks around me was unbelievable. Take a look at the 40-something ducks that all but chased me around out there. 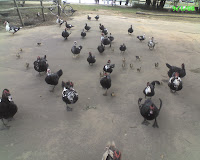 (click to enlarge)
It's true that I haven't fed the ducks in quite some time (well over a year) but I've done it often enough to know that they were much more aggressive this time than ever before. Eventually, people started crowding around watching these ducks follow me. There were so many ducks at different times that they were blocking the flow of automobile and human traffic through the area, so I'd have to herd them this way or that so that people could walk or drive through. I didn't even have to use the bread to accomplish this. If I walked somewhere, they were right behind me - adults and ducklings.

I walked about 50 - 70 yards in one direction to see how far they'd follow me and they hardly strayed - especially if I kept tossing bread. It was quite the spectacle. After I ran out of bread, I biked back to the store for more. At the height of the mallard craze, I know I had a good 60 or so ducks around me. It may have been more but I had a hard time taking pictures while feeding and avoiding them (and their waste).

Here's a pic to give you an idea of how much their ranks swelled: 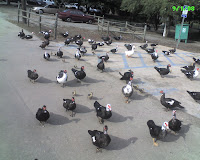 (click to enlarge)
It may not seem like it but that really is a picture of almost 60 ducks. There were people walking by and pulling over, taking pix with their mobile phones, of me playing Pied Piper.

The duck response was so unusual that I wondered if the flood had affected their natural food supply. Some of us theorized about the reasons for their reaction, but who knows the real answer.

When I ran out of bread the second time, I biked back to the store (couldn't help myself) but I saw a police officer on the way. I asked if he knew if I should call the city, county, or whatever about the ducks. He said there's actually a local ordnance against feeding the ducks because they've become something of a logistical nuisance, if I understood him correctly.

So, that was good to know and it saved me the cost of another cheap bag of bread.

But it was really fun little Labor Day adventure. If nothing else, I was able to keep a couple of cool points as I initially attempted to flee without *looking* like I was fleeing from a bunch of ducks.

So that's my long Labor Day duck tale. I'm sure it wasn't as fun to read about as it was to experience but trust me... big fun.

At least, you were their hero for the day! Great post, West! Thanks for sharing it.

I'm an avid fan of duck feeding, though I'm sure you're not supposed to. Its quite addictive. The ducks are so cute, friendly, and appreciative.

Those ducklings are too precious!

I stayed inside and watched football.