Mistakes are inevitable. I've made them all my life and I always will.

Inevitability, however, is not synonymous with irrelevance.

I think there are at least three things one should do after making a mistake that affects others:

1) Admit the mistake.
"This was my/our error. I/We apologize."

2) Fix the mistake.
"Here's what I/we would like to do to make things right."

3) Prevent future mistakes.
"Here's what I/we will do so that, hopefully, this particular error won't occur, anymore."

The first part is so rare that I'm probably a fool to hope for anything beyond it. The second one happens, on occasion, but I think it's only part of the resolution. Taking that third step means that anyone who suffered, a little or a lot, did not do so in-vain. A mistake has value when it leads to prevention or lessons learned for the future.

Just this weekend, some folks lied to me about some damned strawberry shortcake.

I kid you not.

A restaurant I've repeatedly praised on this blog makes a pretty mean strawberry shortcake - something I hadn't been enthused about in ages. So, when we returned to ATL, recently, we dropped by, ordering FIVE strawberry shortcake desserts: 2 with whipped cream and 3 without.

Before leaving, m'lady checked the desserts for whipped cream. 2 & 3. Looked good, so we left.

We decided to stop by Discover Mills, some 30 miles away. When we got there, I decided I wanted a bit of my dessert. I discovered the following: 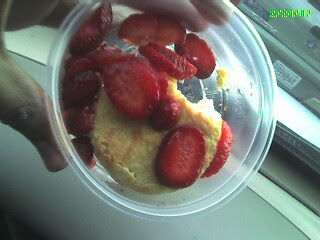 I don't know how well you can see that on your monitors, but my girlfriend describes the above as a dry-ass biscuit with some sliced strawberries on it.

When I called the restaurant, not one, but TWO employees told me they knew, for a fact, that the dish is SUPPOSED to look like that. They said there's no juice, no syrup, no anything liquid in this dessert.

We finished shopping (albeit with a grouchy demeanor) and headed back downtown (sorry, I wasn't throwing away five desserts).

The manager who helped us, then, agreed that the desserts aren't supposed to be dry like that. She went to the kitchen, got the juice or whatever, and applied it to each container. She even added an extra dessert along with an extra container of nothing but the liquid we'd expected before.

She told us, in the future, to be sure to tell the servers to be sure to add the syrup to the dish. I informed her that both employees we spoke to claimed there WAS no "syrup" in the dish.

So, in the end, the desserts were fixed by a smiling, apologetic employee. So, you may ask, why am I not fully satisfied?

Because, these people made a mistake, as people do. Oh well. I can appreciate her approach of solving the original issue but, in my opinion, when someone makes a mistake, they should admit it (although that's a rare and valuable thing) AND take reasonable steps to decrease the chances that it will happen, again.

She only told US what to do differently, as if her staff played no part in this inconvenience. While I recognize that we, as consumers, have a role to play in ensuring our own satisfaction, I'm not sure that someone ordering 5 desserts should have to take them all out of the packaging, open each container, and make sure that that every single ingredient is present.

I dig that she took responsibility by fixing the original issue, but I'm disappointed that she apparently wasn't interested in taking steps ON HER END to make sure this doesn't happen, again, resulting in someone else having to drive all the way back to downtown Atlanta on a Saturday.

Wow, the lying was SO unnecessary. And then the manager expects you to tell her employees how to do their job? Right. I can certainly understand your disappointment.

Will you be going back to that establishment?

Maybe you need to go higher. Write a letter to the organization if it is a chain. I would have been vexed if I had to drive back somewhere to fix a problem and they acted like it was my responsibility.

That is a crazy episode of lying.

I'll definitely be back to read more.

Unreal brotha West. Funny thing happened to me last week where I was blamed for something, but after I explained sternly in an e-mail, I was supposedly cleared. And no apology followed.

I just laffed at the way the person circled around having to administer a simple "I'm sorry." I agree with all of your points you made about a mistake though. I definitely do ALL three! I believe in that if I am in the wrong. Nicely done W.

For some reason, I didn't get these notifications earlier.

b. good: I've been thinking about that. It's become such a huge part of our Atlanta experience that I'd hate to cut them completely loose.

Still, this was just ridiculous and I hate to reward that. I'll try to stay strong.

miz jj: It's a local restaurant with a loooong history - Mary Mac's.

james burnett: Welcome, James. You're absolutely right about this being a crazy episode of lying. I mean, of all the things to lie about.

Pride is a powerful thing.

people would rather die a horrible death involving a parking cone and a shoe horn than admit to any wrongdoing that they had no part in. As management, people should understand that they need to fess up for their employees wrongs/foibles/idiot moments but they wont because they feel they were not the ones who did it so why should they?

This my friend (do i know you?!) is why i only hang with animals now. humans just piss me off left and right. and all directions in between.

Heh. I hear ya, yasamin.

The reminds me of a Calvin and Hobbes comic. In it, Calvin gave up on humanity and headed off, nude, into the wilderness.

Thanks for dropping by.

Okay, I know I'm kind of late on this one. But! I just want to k.i.l.l. the manager and the servers in these kinds of situations. I mean I really get so vexed I contemplate physical violence! I'm big on service. I've done catering on and off for a few years now - and I'm a firm beleiver that you need to do everything you can to keep the customer happy. If it ain't even your damn personal strawberry short cake at your house - you ought not be saving the damn sauce like it's yours. Find out what goes in the dish, presentation and all. Put it in/on the dish everytime. If you don't your ass needs to be fired! Period!

Go over the manager's head. She is more concerned with being friends with her wait staff than she is with upholding the integrity of the business. If I created a great strawberry shortcake, sold it at my restaurant, built a clientel that would drive 30 miles to get 5 of said shortcakes and a bi@*&, no three bi@*&es,told my customers some bullshit, I would want to know about it. Again, I'm all about service. : )

Well, the manager wasn't quite as bad as the other folks. I just didn't think her focus should've been on telling us what WE should've done differently.

I didn't think she did us wrong so much as she didn't do us as "not as right" as I would've liked.

Dang. Whatever happened to "The Customer is always right"? The employees know what keeps people coming back for that treat, yet lying about it seemed easier.

I think I would've went on that website and put them on blast. That's just me tho.

I'm sitting at my desk at work clapping! The world, and I really mean this, would be a better place if people just took responsibility for their mistakes and actions. When I was about 22 I came to the realization of this universal truth and I have lived by it ever since.

It amazes me that you were expected to supervise the staff and tell them how to make a strawberry shortcake. If you ever go back and you do remind them to make the desert the correct way you better believe that whoever is making the treat will be offended. You'll be the jerk telling them how to do their job and your desert will be topped with more than just syrup.

Responsibility - it's not a curse word.

You called it. The new server wouldn't appreciate being judged by those that preceded him/her.