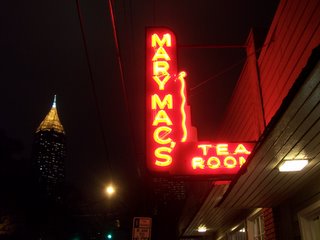 We went to Mary Mac's Tea Room, while vacationing in ATL for the holidays. Unfortunately, the restaurant was closed through the Wednesday after Christmas. We finally went on Thursday or Friday.

I ordered seafood, this time. They've got a platter or whatever with shrimp, oysters, crawfish, catfish, and some sides. My girlfriend got some kind of steak, I think. I'm not sure.

Anyway, I enjoyed everything except for the veggie soup (which I never should've ordered) and the catfish which was prepared a little differently than I'm used to... and was pretty boney.

Our server was the rather talkative bartender who really never shut up from the moment we sat down. I think he was just trying to keep from being bored, while convincing himself that he was keeping things lively. Then another employee entered and started talking louder than him. Something about Titalians. We tried our best to tune them out.

As I've mentioned before, the restaurant provides cinnamon roles, cornbread, and yeast (?) rolls with every meal and they were delicious. 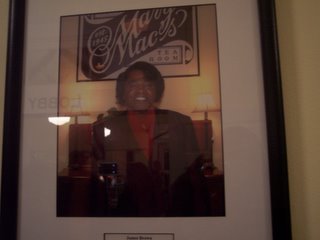 The pictures of celebrities, politicians, and other notable figures filled the walls. I snapped a few shots to give you an idea of what the place looks like.

Like I said, the talkative employees weren't a bright spot in the evening, and neither was the poor service we received THIS time (they have us write down our orders and ol' boy STILL forgets and asks us what we want... multiple times... then still gets it wrong), BUT it's still a place I'd recommend. Good food and good service, as long as you don't get the guy we had, I think. 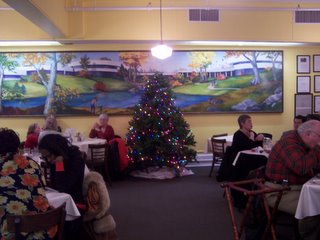 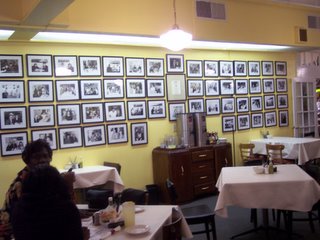 I'm not an employee or anything like that. We just like to the place and try to stop by whenever we're in town.

i've lived here for years and have never been there. i'll be checking it out soon. sorry i missed you when you were in town. hopefully i'll see you the next time you're here.

We're quite fond of the place.

I guess that's kinda obvious considering how displeased I was with the service, but I still plan to return.

I'm not sure why we had such a hard time finding it before. This time was an absolute BREEZE.