While in Orlando, Florida, recently, we also visited McCormick & Schmick's, my second favorite restaurant ever. The pictures were taken with my Treo in restaurant lighting, so they're less than perfect. Hopefully, you've installed the color-correction Add-On into your imagination. 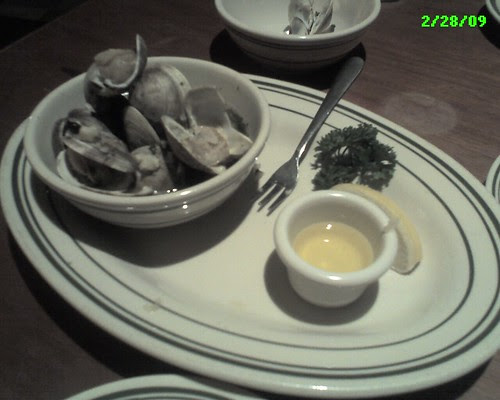 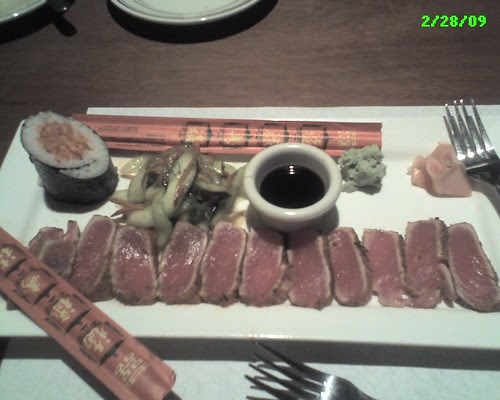 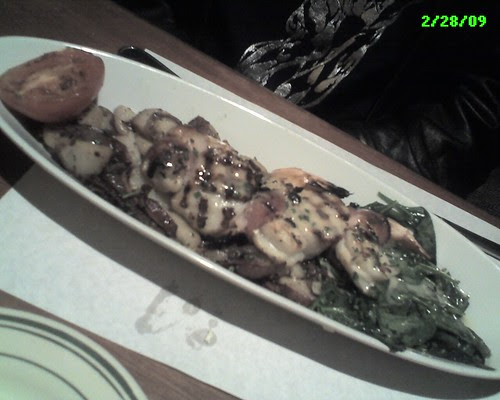 The appetizer was decent, but nothing to write home about (and yet, here I am showing and telling). It certainly lived up to role as the culinary opening act.

The entrees were fantastic, as usual. It seems that McCormick & Schmick's menus may change from one day to the next, so I couldn't rely on my crutch of always choosing "old faithful" at a given restaurant. Our waiter was very friendly and knowledgeable, while also "working us," so he was able to recommend dishes and answer questions. Because of him, we got these two dishes and we couldn't have been happier.

The Yellowfin Tuna didn't sound like anything I'd want, but after hearing that I really enjoy (real) sushi, he told me, "Look, if you don't like it, I'LL EAT IT. I'm not kidding!" Then he grabbed a co-worker who echoed, "No, really. He's not kidding. He has it almost every day."
The meat is just seared. Don't ask me why the heck that raw/seared combo works, but it does. It kind of reminds me of the combination of a hot pie and cold ice cream.
I savored it, as usual.  You all don't need to hear me go on about the various levels of flavoriciousness, again, so I'll leave it at that.

The shrimp and scallop skewer was great, as well. Tasty, fresh, and generous portions. What more can one ask for?

We felt like we got our money's worth, had good food and a good time... and even managed to eat fairly heathily. Yes, that's a word now.

The service was great, as always, except for our server becoming over-extended and abandoning us, for a while. We forgave him.

As always, highly recommended. (As are reservations.)