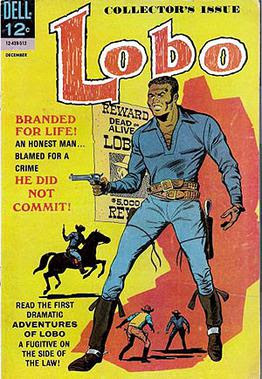 This isn't the "Our World" post I originally planned on sharing, today, but Scott Shaw!'s Oddball Comics column at ComicBookResources.com highlights - LOBO, "the very first mainstream comic book to star an African-American character." Talk about a character with potential. This guy was in a comic book Western, but was apparently something of a pacifist. I didn't finish the entire column (though I plan to return, later) but what I did see was pretty doggone impressive.

By the way, Scott Shaw! says that Lobo's ethnicity wasn't mentioned in the series (two-issues, granted, but still). For a sec, I considered the possibility that this was simply a coloring error or something, but I noticed his hair. Now I'm confident that he was intended to be African-American.

Anyway, it'd be nice if all of my 0.25 readers stopped by Scott Shaw!'s column to take a look and let me know what YOU think.


EDIT: By the way, despite the column's name, I don't think Mr. Shaw! was implying anything negative about the character or the comic. Just thought I'd put that out there.